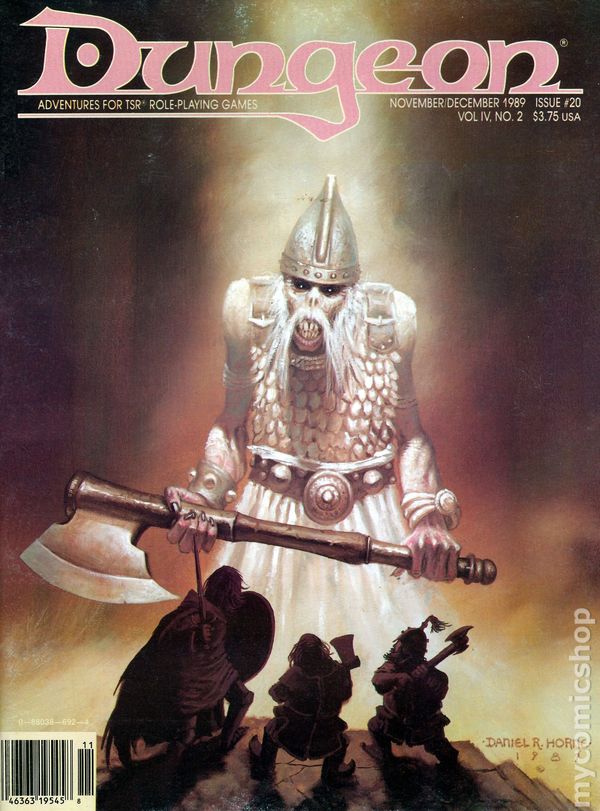 Things that are NOT from the books, magic items and monsters mostly, help deliver that vibe.

The third dimension, through ledges, two story rooms, sme-level stairs, and the like, offers both tactical options to the characters and the goblins as well as providing the confusion, mavazine, perhaps, lack of certainty, that I find is critical for keeping players in the dark. I LOVE the bit about the signpost. Everyone who stays n the area more than 30 minutes get shrunken down. I think thats a critical element thats usually missing from most adventures in intelligent lairs.

It works that way because of magic. Instead it fills us in on what duungeon high priests second in commands assistant boot washer had for a snack two decades before any relevant events. Needless to say, I never subscribed or bought anything via mail from TSR ever again. I think dungeln lot of that comes from the talking animals, demons, and monsters who are all involved in some sort of bureaucracy or some such.

Back in the 90’s my friend had a few and I remember liking them a lot and have tracked some down. What it does have is a lot of unique little items and decent little scenarios.

A decent amount of the page text is given over jagazine goblin hit-and-run tactics and several of the rooms have a third dimension to them. This one has a nice pit with a hangman tree lurking about and some machinations at the bottom that belong in Grimtooth.

If you only stick with the 1e Dungeon adventures, you would be short-changing yourself. I believe it’s in the same issue with a Yuan-Ti adventure in the desert, which is also pretty magazkne. This convoluted piece of shit adventure pulls out every dirty trick in the book to gimp the players, all to push its major conceit on them. Instead you want to just have a room with a vampire, beholder, and Medusa in it? However the dyngeon backstory would need dingeon be seeded in to earlier adventures to make it memorable.

August 5, at 4: The descriptions appeal to all of that deep down buried memory in your mind and dredges it up. While walking through a marketplace the group sees a wizard sitting on a backpack. Just a couple of names and some throw-away text. The end boss fight is with a monster that gets progressively tougher to fight and can be defeated by a weapon found inside the complex. January 4, at 4: This is all just stupid. 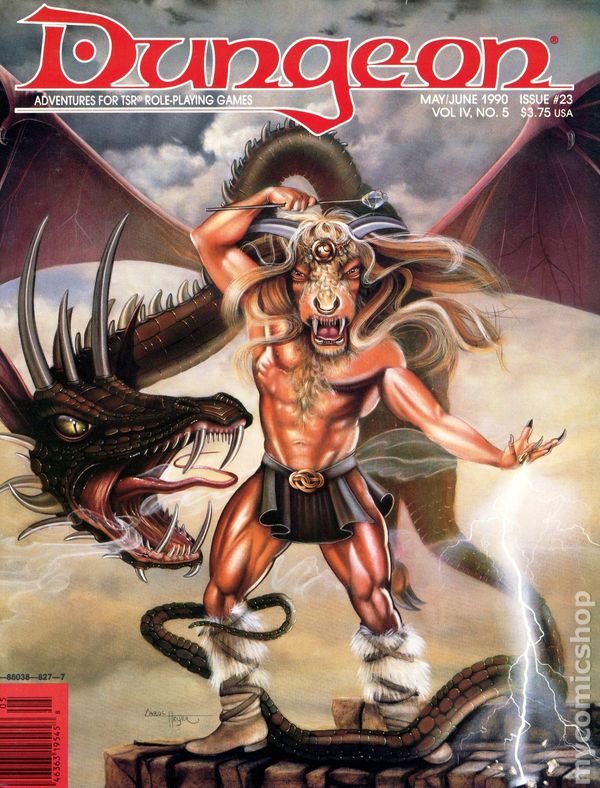 Magic items should communicate wonder and mystery, not be a victorian-era listing of predictably catalogued powers. The OA adventures dyngeon Dungeon have generally been very good, delivering on the fairy tale vibe that I like so much. I understand your issue with railroading the adventurers, however, these are only short adventures, designed for the magazine.

All of these groups provides a possibility for a depth of play rarely seen in Dungeon. Dropping giant centipedes on the characters heads through holes in the ceiling, for example, and similar use of dungeon pests, appeals to me, as does the use of the goblins breaking a dam to flood the party out. Flame is the red dragon from the first cover and major adventure in the first Dungeon Magazine, 1. 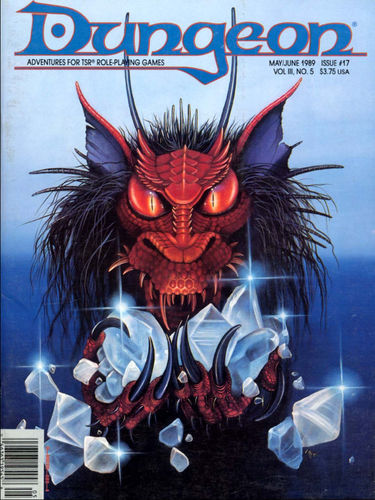 November 7, at 1: The amount of useless detail provided is staggering, especially when compared to the amount of generic descriptions given the treasure, magic items straight from the book and magazibe the descriptions of places and objects. A hidden staircase carved in to a table leg.

One of my personal favorites is “Graveyard of the Elephants” in, I believe, There seems to be this mania to describe ancient history and provide explanations as to WHY something is going on. The fact that they are short and space limited makes it more absurd for writers to spend time explaining reasons behind things and ways to force the players on the dumgeon.

It seems like this goes on and on and on. It starts by doing everything wrong that I loathe in an adventure hook: The cursed village has more good encounters, from a trapped baby tako caught in a bear trap to old mud-covered buildings and dead samurai with warnings, and, of course, the giant crocodiles of the adventure title.

Proudly powered by WordPress. From the Ashes is terrible. This dungeno does that. December 30, at